After graduating from Purdue University in 1977 with a BS in Agriculture I began a career in the landscape industry.  I later moved back to the farm and raised hogs, corn, soybeans and operated a small nursery.  It was during this time that I first dreamed of agriculture mission work.

I later returned to the landscape industry where I spent most of the next thirty years.  During this time I participated on mission trips to Ukraine, Grand Turk Island, Haiti and Ethiopia as well as working for the Bermuda Government Department of Parks.

After a 2012 mission trip to Haiti the dream became focused on Haiti and developed into a vision.  This vision became a reality in 2017 when I began full time mission work in Haiti. 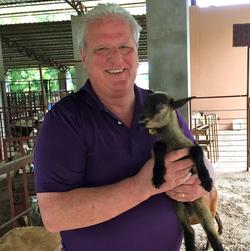 In 2016 I had the opportunity to participate in the USAID Farmer to Farmer program through Catholic Relief Services.  For three weeks I taught classes in Horticulture Crops Production to instructors and students at Alage ATVET College in Ethiopia.  The classed covered tomato and onion production, Integrated Pest Management, and grafting of mangoes.